When most people think of the top ten or even five greatest harbour’s in the world, Sydney Harbour will almost always make that list.

At a massive 55 km², Sydney Harbour, or Port Jackson as it is formally known, is the world’s largest natural harbour and it’s an inlet of the Tasman sea.

The harbour is used by hundreds of thousands of Sydneyites each day to commute to work and to enjoy in their leisure time. It is also visited by millions of people from around the world each year because of it’s spectacular natural beauty and it’s surrounding world famous landmarks.

If you’ve just arrived or are planning a trip to Sydney soon, a day out on the harbour is a must. Not only are the views spectacular, but it will give you a chance to tick off all the those famous things to see around Sydney Harbour.

There are few ways you can do this. Maybe book a sightseeing, lunch or dinner cruise or jump on an iconic Sydney ferry. But if you’ve got limited time and want to see all that Sydney Harbour has to offer then you can’t go past Captain Cook Cruise’s Hop On Hop Off Sydney Harbour Explorer boat.

How Does it Work?

Just like a hop on hop off bus except on water, you climb aboard at any of the given stops and then you are free to hop on and hop off as much as you like for the duration of your ticket. It’s as simple as that!

This gives you the freedom to explore different parts of Sydney around the harbour at your own pace, eliminating the need to work out complicated  ferry timetables.

One ticket is valid for 24 hours from the time of purchase so if you feel like a sleep in and don’t get going until after lunch, you have until the same time the next day to keep using the pass around the harbour.

Boats leave the main hubs of Circular Quay and Darling Harbour ever 45 minutes with a full loop of the route taking up to 90 minutes if you choose not to hop on hop off at one of the nine stops along the way (i’ll get to the stops shortly).

The boats are super comfortable catamarans with inside and outside top deck (air conditioned!) seating so no matter what the weather is like you can either be enjoying the breeze in your hair on the top deck or staying cozy inside the cabin.

Every boat has a guide who will point out the most interesting sights around the harbour as you cruise from stop to stop and entertain you with a corny joke or two and lots of interesting facts about Sydney and it’s harbour.

So now that we’ve got the particulars out of the way I’m sure your wanting to know more about the stops and the things you can see along the way. Below I’ll outline for you a little about each of the Sydney Harbour Explorers stops and what you can see while your there. 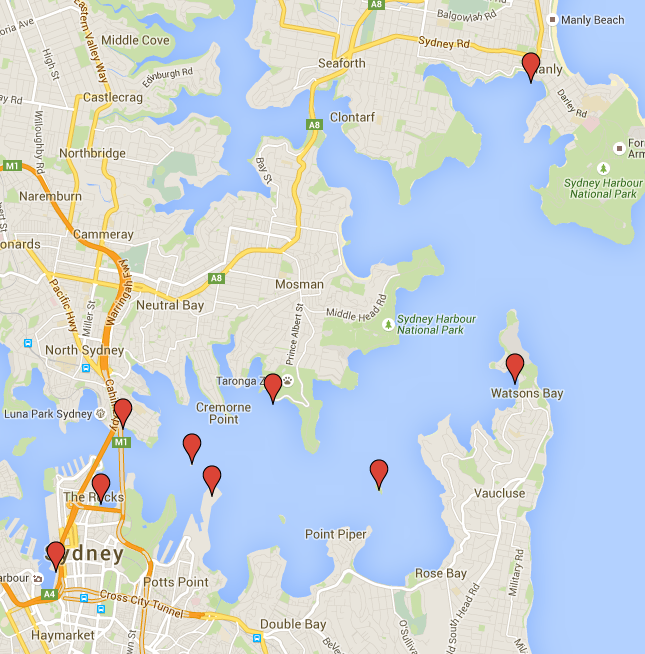 Things to See Around Sydney Harbour

Tropical fish in the Sydney Aquarium

Darling Harbour is known as the entertainment hub of Sydney with it being packed full of restaurants, bars, museums and attractions.

What’s Nearby: It’s just a short walk to The Powerhouse Museum, The Star Casino, Chinatown and the Chinese Garden of Friendship.

Close up with the Sydney Opera House

This is where you can catch some of the best views of Sydney’s most famous landmarks and also explore one of Sydney’s oldest areas.

What’s Nearby: Circular Quay is well connects to the City Circle train line giving you access to other parts of the city. It is also not far to walk to the shopping hub of the city, Pitt Street Mall and the Sydney Tower Eye.

Just one main attraction here, Sydney’s Taronga Zoo which is set over 52 acre and is home to over 4,000 animals from all over the world. Not to be missed are the native Australian favourites like the kangaroos, koalas and platypus plus they have a very entertaining seal show, a family of asian elephants, giraffe and a whole host of other creatures great and small.

What’s Nearby: Paths lead all along the north shore of the harbour so from the zoo you can walk out to Bradley’s Head and then onto Chowder Bay.

A city view at Watsons Bay

A city view at Watsons Bay

Tucked away on the southern side of the entrance to the harbour is the affluent suburb of Watsons Bay. The area around Watsons Bay is where you will find some of Sydney’s most expensive real estate and the waters edge is lined with mansions worth millions of dollars.

What’s Nearby: Buses run from Watsons Bay to other parts of the Eastern Suburbs like Parsley Bay, Vaucluse and even Bondi).

A close up of the Luna Park Sydney Entrance

If you are visiting Sydney with kids then they will absolutely love this stop! Iconic Luna Park is nestled just next to the north west pylon of the Harbour Bridge and can bee seen from far away because of it’s famous smiling face entrance. It is free to get in and wander around and then you just pay per ride/attraction.

What’s Nearby: Why not use this opportunity to walk back to the city using the Harbour Bridge. There is a walk/bike path that runs along adjacent to the road and offers stunning views of the harbour.

The harbour side of Manly

Sydney has many great beaches and the second most popular (after Bondi of course) is Manly. No matter what time of year you visit you’ll find tons of people wandering the Corso and enjoying the beach.

What’s Nearby: Explore the beaches further north by jumping on bus.

The view from Fort Denison

This is the first of two harbour islands that the boat stops at. Fort Denison is a formal penal site in the middle of the harbour just off from the Botanic Gardens. The island is free to visit and explore the garden and museum which tells the history of the the fort which dates back to before the arrival of the First Fleet in 1788. There is also a short guided tour you can take (for a fee) up into the Martello Tower.

Fort Denison is not only a great spot to stop for its interesting history, it also afford great views of the harbour, the Sydney Opera House and Harbour Bridge. There is a fine dining restaurant on site too which requires pre-booking or you can great a coffee if they’re not too busy.

Don’t be frightened by the name of this island. It’s not where sharks hang out, rather it is the shape of the island that gives it it’s name. With 360° views of the harbour and city skyline, Shark Island is the perfect spot to stop for a picnic. It’s only small so you can easily fit in a quick visit to wander around and eat lunch as you whiz around the harbour.

Another deceiving name as Garden Island isn’t actually an island. Rather a peninsula of land that juts out into the harbour. This spot is home of the Royal Australian Navy as you will see from the Navy ships docked along the harbour.

If you get off here you can enjoy a small part of the land near the wharf for a picnic or wander into the RAN Heritage Centre Museum to learn more about Australia’s Navy heritage. They have tons of cool stuff on display including the conning tower of one of the Japanese midget submarines that attacked Sydney Harbour in 1942 during World War II.

Disclaimer: Thank you to Captain Cook Cruises for hosting me for this fun day out. As always, all opinions expressed in this post are my own.

Have you visited Sydney Harbour? What did you love most about it? If not what are you most interested to see and do?