My Easter weekend was spent mostly working on the tons of new content and ideas that are coming to The Trusted Travelling in the coming weeks, with a bit of family time in the evenings. I did however decide on Good Friday that I had to get outside and enjoy this beautiful weather we’ve been having in Sydney this last week.

I’ve driven over the Sea Cliff Bridge probably a hundred times but not once have I ever parked the car and walked over it. So with the perfect weather we decided now was the time.

The Sea Cliff Bridge is located just south of Sydney on the New South Wales South Coast and forms part of the Grand Pacific Drive that runs 138-km from the Royal National Park at Loftus in South Sydney to Nowra on the South Coast.

Opened in 2005 as a replacement road for the existing dangerous stretch of road that ran from Coalcliff to Clifton. The old road was notorious for being closed due to landslides, mud slips and rock falls caused by high rainfall, weak rock and marine erosion.

The 665m bridge runs out over the water away from the rock face and is held up by concert plyons that are buried deep in the sea bed below.

We started our drive at Bald Hill overlooking Stanwell Park with views of the Sea Cliff Bridge, coastal towns and as far south as Port Kembla 40-km away. It was packed with people enjoying the sunshine and amazing view on a perfectly clear day. 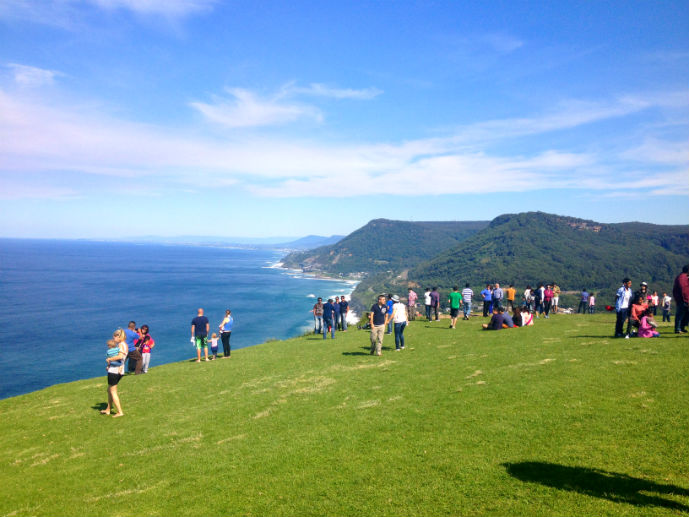 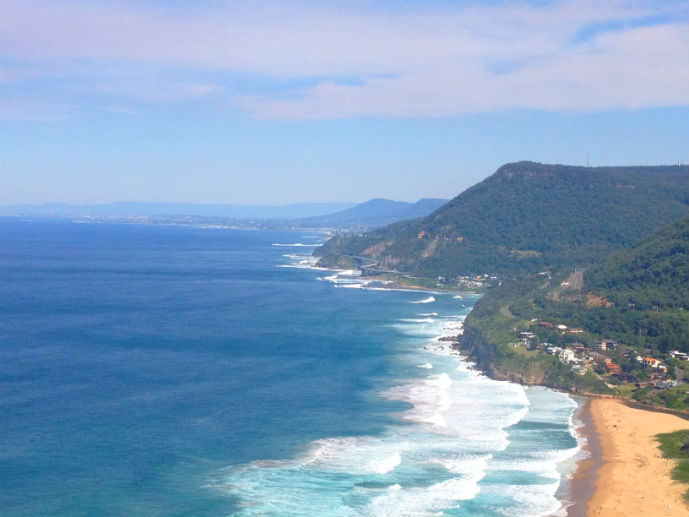 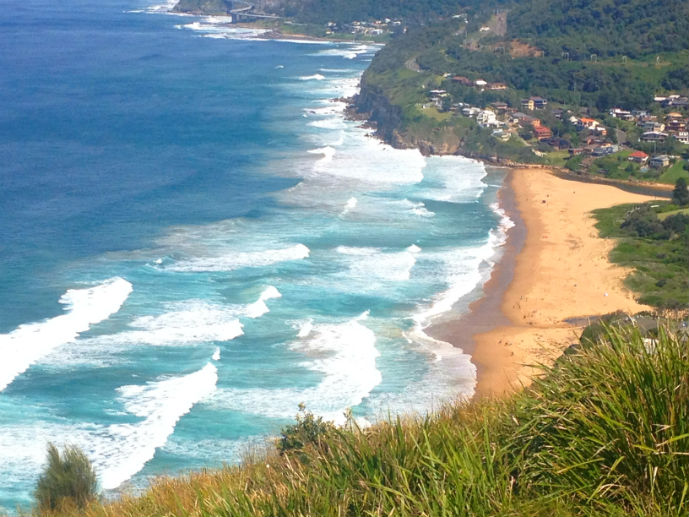 From Bald Hill it’s just a few minutes drive down to the bridge passing some nice quiet beaches and sleepy little townships. We drove over the bridge first and parked the car in the spaces provided on the south end.

Hopping out of the car we set off for our walk across the bridge. The footpath runs along the ocean side of the road with a four and a half foot barrier stopping you from plummeting over into the churning sea below. The bridge twists and turns around the cliff faces offering incredible views looking up, north towards Bald Hill and out to the sea. 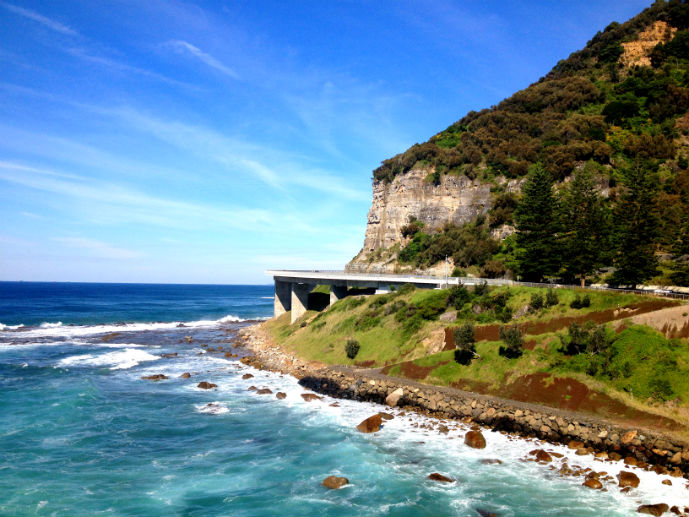 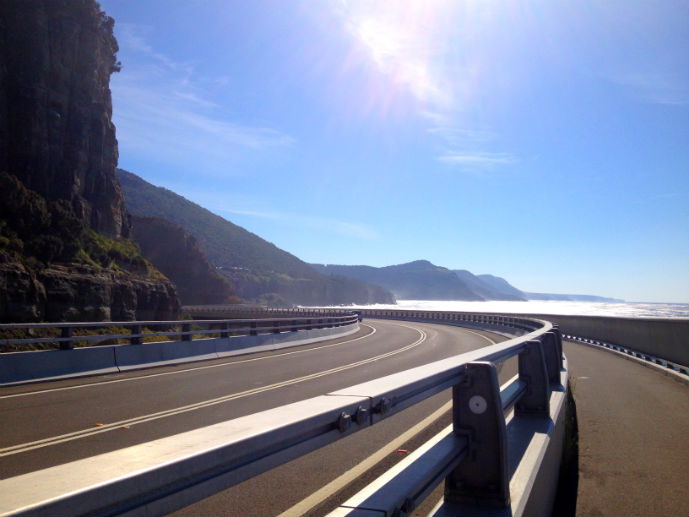 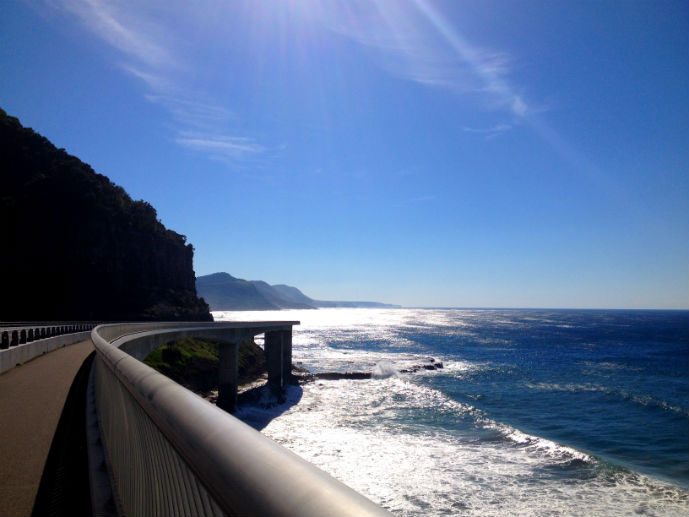 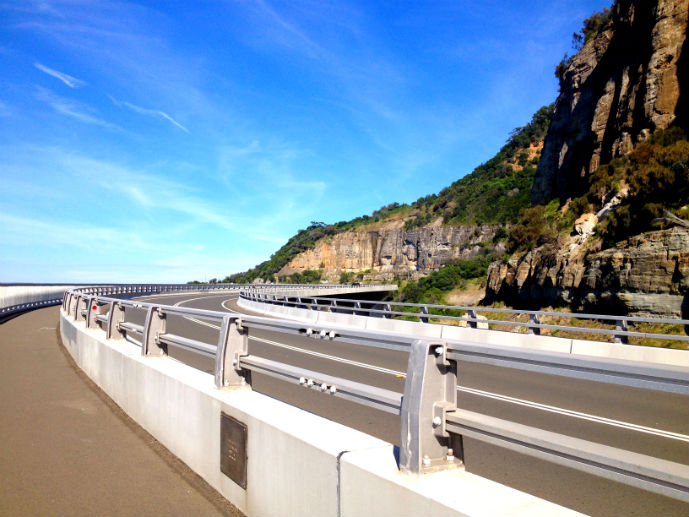 We made a few stops along the short 30 minute return walk to look over the edge at the waves crashing against the rock below, turning to sea foam and spilling over the rocks. 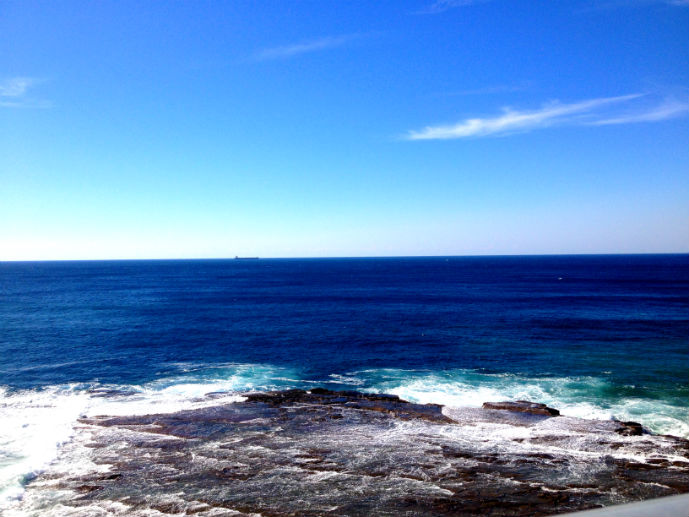 About three quarters of the way along is an information board telling the history of the area, the original road and its dangers and the building of the new bridge. I learnt a few things from reading this like that the original road was built in the 1860’s and was named after the aviation pioneer Lawrence Hargrave.

On returning to the car we continued our drive a little further south to Austinmer headlands stopping every kilometre or so to check out the view from the half dozen lookouts along the way. After our little half day adventure we headed home sun kissed and full of fresh sea air, happy that we had finally taken the walk across one of the South Coasts biggest draw cards.

Getting to the Sea Cliff Bridge is simple by car from Sydney by two routes. First travel along the Princes Hwy where you can either turn off into the Royal National Park at Loftus and take the Grand Pacific Drive or continue along the highway and take the Helensburgh turn off. Once off the highway at Helensburgh just keep following the road until you see the sign for Grand Pacific Drive. If you go straight at the intersection for 100m you are at Bald Hill or turn right and head down the hill into Stanwell Park and from there it’s just a few minutes to the bridge. If your without a car you can get to the Sea Cliff Bridge by train to Coalcliff Station from Sydney’s Central Station and then walk 15 minutes to the start of the bridge.

A great place to stop for lunch or a drink is the Scarborough Hotel, just a few hundred metres south of the bridge. The view from the beer garden out the back is stunning.

We love taking a short drive on the weekend to places like this when we’re not travelling. It gives us a little escape that keeps us sane until our next trip.

Where do you like to escape to on weekends or your day’s off?