Some of the best publicly accessible caves in Victoria can be found at Buchan, in the East Gippsland region 350km east of Melbourne.

While the distance from Melbourne is a bit far for a day trip to Buchan, it makes a great weekend getaway or can be included as part of a longer trip in the Gippsland Region.

How Buchan Caves Were Formed

The calcium carbonate which forms the basis of the limestone formations comes from the skeletons of shellfish and coral which were deposited when the sea still covered southern Gippsland. The subterranean chambers and passages were (and still are) carved out by the rainwater that trickles into the caves, forming spectacular stalactites (shooting down from the ceiling) and stalagmites (shooting up from the ground) which sometimes meet to form impressive pillars, or waterfall-like structures.

What Can You Explore at Buchan Caves

At the Buchan Caves you will find two limestone caves that are accessible to the public through a guided tour, the Fairy Cave and the Royal Cave. Both caves can get a bit claustrophobic with some tights spots to squeeze and crouch through as you make your way through the cave, however they are both very safe and well lit.

As well as the caves, the reserve around the caves is absolutely stunning, especially in Autumn. Have a picnic or hike one of the trails that lead off from the picnic grounds, just make sure you keep an eye out for wildlife, there is an abundance in the area. What You Will See in Buchan Caves

Firstly, when you walk into the caves you will notice a sudden temperature change. No matter the time of year and outside temperature, the caves are a constant 17 degrees all year round.

As you move through the caves with your guide, caverns big and small open up and are perfectly lit for you to feel the enormity of these underground cave systems. The main features of the Fairy Cave have been names things like King’s Chamber, the Queen Victoria Chamber, the Hall, the Jewel Chamber, the Grotto, the Bridal Chamber and the limestone “Wedding Cake’ which is frosted with what resembles icing sugar. One of the most interesting features of the Fairy Cave are the bones of kangaroos and a wombat the size of a horse which can be seen on the cave floor.

While you will also see some impressive stalactites and stalagmites in the Royal Cave, the highlight in this cave is the calcite-rimmed pools.

Two of the most amazing features in the Royal Cave are what has been names ‘Niagara Falls’ and the ‘Font of the Gods’. These waterfall like features have been formed due to passages of water fulling over ledges above and into the caves. An interesting fact that I learnt while exploring the Royal Cave in particular was that the red and brown colourations within the caves are caused by the presence of iron oxide and the green shades are caused by copper.

Read More
Things to Do in Gippsland Victoria

Each cave tour takes approximately 45 minutes to one hour with a guide. Bags, prams and bulky photography gear is not permitted in the cave. You can take a regular hand held camera with you and photography is most welcome while on the tour.

The Fairy Cave has approximately 100 more steps throughout the tour than the Royal Cave and also requires a bit more bending down. If you do get a little claustrophobic then my recommendation would be to explore only the Royal Cave.

As each cave have unique features, it is a great idea to try and visit both during your visit.

Tours are run at approximately the below times each day with the caves closed on Christmas Day only:

There are limited places for each tour so pre-booking online is recommended to avoid travelling all the way there and being disappointed.

Where to Stay in Buchan

There are a small number of places to stay in the Buchan Caves area including campgrounds, cabins and motels. For all accommodation bookings I user and recommend Booking.com. Check their site for availability and the latest pricing for all Buch Caves area accommodation.

Or why not book an Airbnb stay. Use this link to get up to $45AUD off. 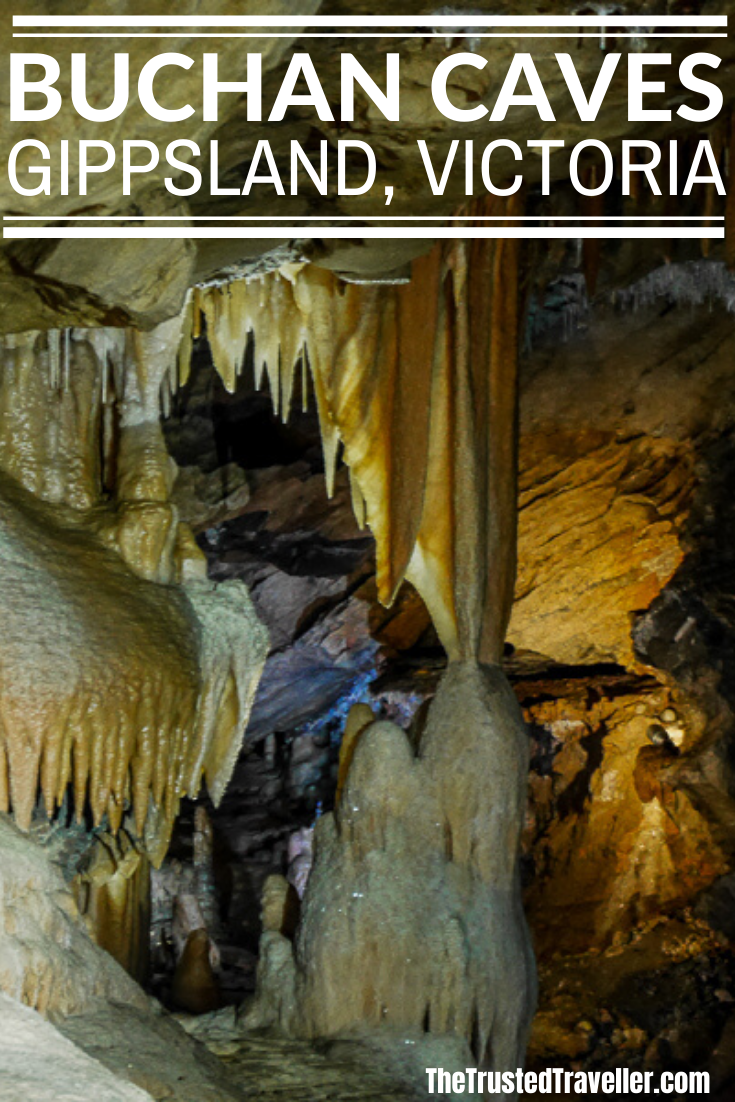 Where in the world have you visited the most impressive caves?